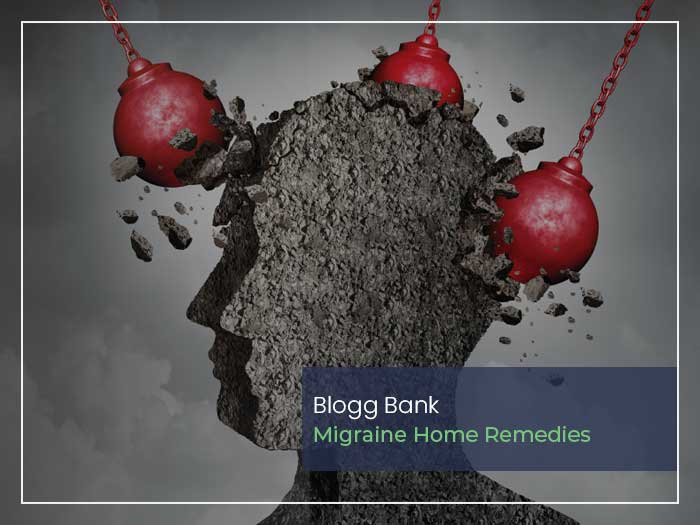 Migraine is a frequently occurring throbbing headache that affects one side of the head and is often accompanied by nausea and disturbed visions.It is one of the most common conditions in the world.

The symptoms include nausea, vomiting, numbness in hands or feet and disturbed visual changes.
There are many medications used to prevent migraines.
Some people prefer home medicament over medications.
Discussed below are some of the home remedies for mitigating the effect of migraine a little.

It is the application of pressure to a confined part of the body. This method is known to release muscle tension and relieve pain.One popular pressure point is the in the space between base of the left thumb and pointing finger.

It is commonly known that “prevention is better than cure.”
Being aware of the diet ways that add up in the triggering of migraine might help relieve the pain to some extent.There are plenty of journals and apps that can monitor the diet of a person.Changing diet or eating patterns to avoid triggers may help to prevent migraines or at least relieve the pain to some extent in future.

Essential oils are often used as home remedies or as an antimicrobial.
Lavender is an essential oil often related with the relief from stress and anxiety attacks which would further prevent the migraines.

Ginger is known to have pronounced effects on preventing migraines and the benefit for people who get migraines is that using ginger cannot hurt and there are no side effects to using it.As it precisely prevents 200 more kinds of diseases.

Stress is a well known trigger for migraines. Stress can generate a vicious cycle which adds up to make the migraines worse and worse to end up in another migraine. By managing stress via activities that deviates it, a person is choosing to control their body’s reaction to stress in life.

Biofeedback is a therapy that people use to trigger the release and relaxation of tight muscles, which takes practice and training. It is a useful and one of the cheapest easy-to-go method for mitigating migraines and its symptoms.

Massaging the muscles in the neck and shoulders can help to relieve tension which further alleviates migraine pain. Massage also reduces stress, so indirectly stopping the migraines’ occurrences.

Butterbur and feverfew are common two herbal supplements that may be helpful in reducing migraine pain and the duration.

The B vitamins are water soluble and their excess levels are excreted in urine, thus may have an impact on reducing migraine frequency and severity. B vitamins play role in regulating migraines.
Thus, these are some of the home remedies that help to relieve migraine and the symptoms cause by it.

Tips to Success of Fitness